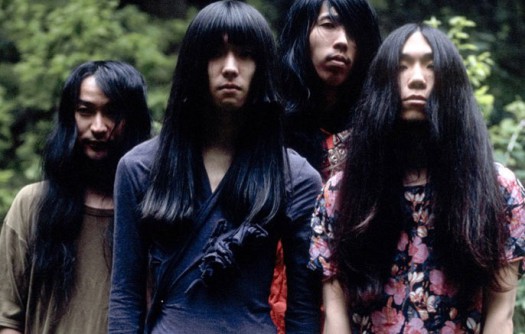 Bo Ningen proves that you can actually recover from post-rock – even if you’ve walked into that particular cul-de-sac of grandiose but empty gestures and you’re standing at its dark end, a brick wall imprint on your forehead and nose all bloodied, there’s still hope.

As long as you go weird.

That’s what Bo Ningen is. Weird.

I listen to DaDaDa and I think of all the bands that have been robbing post-punk’s grave for the last ten years and coming away with a sound and a look instead of an idea and en ethos. Bo Ningen went there and instead of a haircut and pair of tight pants that scream for some pointy shoes, they came away with an idea – a way of doing things.

They sound like a band that likes to colonize the world outside their comfort zone. Why else would you marry Gang of Four’s guitar attack with a Rush groove?

But you know what? The thing I love the best is that they manage to be psychedelic without drowning the world in a mess of cavernous echoes. They do it by being weird, not by stomping on a box.

It makes perfect sense that the English band they would find most in common with would be Savages – another band that obviously thought a little harder than most about what happened as the 1970’s petered out in a brutish and cynical mess, making way for the 1980’s and more of the same, but with a nastier edge, thanks to all the coke and VD’s.

Go on. Get weird.