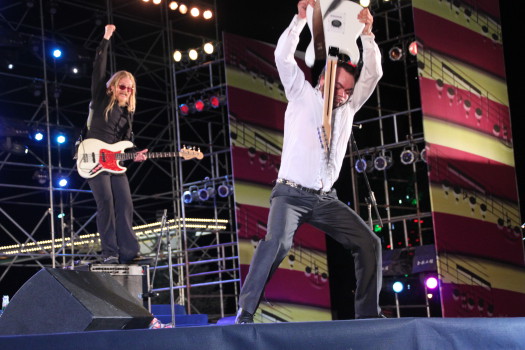 Harbin Music Festival is a very famous and traditional music festival in China. It’s not known for rock music, it’s quite special to have a wild band like Knucklebone Oscar to perform there.

I’ve understood that you performed at the city’s main square for thousands of people. How did the Chinese people take it?

Oscar: ”They liked it. But I guess the locals are used having local dance groups and choirs and such. So I was bit surprised only 10.000 people showed up to the gig. I was expecting closer to 20.000. But they really loved me! I think they liked the band too. But they were bit shocked. They had never experienced a 100% rock’n’roll show before! I was in top shape and the show was just spectacular. After the show people tried to tear the walls down and rush to the backstage to get a glimpse of me. They were friendly. But I think I only talked to girls. We must have given hundreds of autographs.

Panda: ”I think the show went quite ok. It was a standard Knucklebone Oscar performance.I was expecting 500–1.000 people to show up. Finally more than 7.000 people came to see the show. It was quite a surprise. More surprising was that people actually bought band merchandise after the show. Normally that does not happen in China. The audience seemed to be quite happy to see the performance. They were asking autographs as well.” 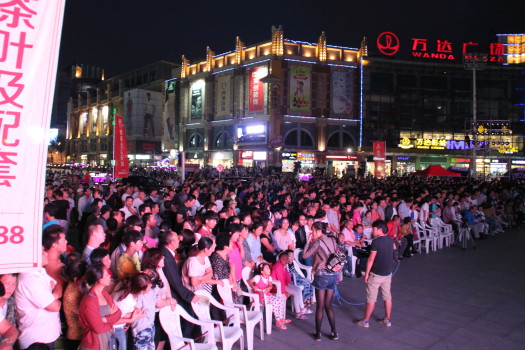 Arranging rock concerts in China and especially in a city like Harbin is not everyday life. Also having rock bands as guests is not common and can feel challenging to the organizers. Did everything go smoothly, did you experience any unexpected problems or difficulties during your visit?

Oscar: ”When we arrived I immediately noticed our local guide had no experience of international rock stars. He was hired by the state party and was scary and stiff as shit. He didn’t even speak Finnish! He ordered us to stay at the hotel all the spare time, for safety reasons. What a Jerk. He was easy to fool. Olavi was trickier as he was suspicious and nervous that we’d really fuck it up. After they went to sleep we started a big time houlama. Russian ladies until early morning.”

”Gear at the venue gear was crappy and so was the technical personnel. They didn’t let me see the backline in forehand. I guess they were afraid to show how shitty amps they got. Olavi had promised me vintage Voxes or Fenders. The truth was they got us Chinese guitar amps! Really underperforming piece of shit. Sounded still decent when cranked. But mainly because I play so good. I can make everything sound good. Otherwise no problems.”

Panda: ”The technical side went well. There was minor problems but nothing I couldn’t handle. Last time in Beijing Oscar destroyed a Fender amp. So I told the festival arrangers to get us the shittiest amps they can find. I don’t know where they found those amps. YEMA Karaoke OK channel, haha. I just told that there is not other amps. Oscar was pissed off that they got these YEMAs.” 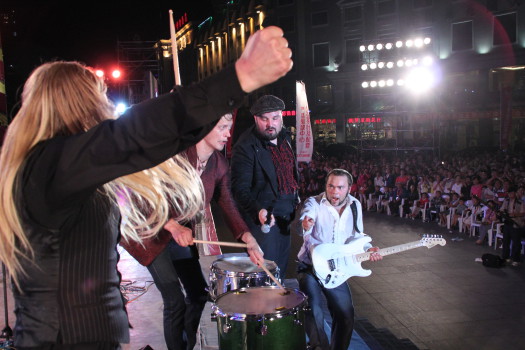 ”Quite a hazard happened during the show. There was real busy traffic on the road just next to the square. Jarkko stumbled to that road with Oscar on his shoulders. My heart skipped a beat. Oscar had promised not to get offstage as it was prohibited. Massive chaos, some cars collided into each other and caused a traffic jam. Strangely the organizers didn’t mention anything about that after.”

”We had given a personal guide and driver for the visit. He was to help out with practical stuff and local transport. The guy was prompt and clear, very nice and social. He seemed to be experienced and handled everything with confidence. He spoke very good english too. Which is not that common in China.”

”One shocking incident happened after the festival celebration dinner. Oscar and Niko attacked the head of festival committee during a drunken brawl. It was supposed to be a friendly game or something. It ended up being a fight and the guy got really scared. Eventually all worked out but I had to put on my best act to get that situation solved.” 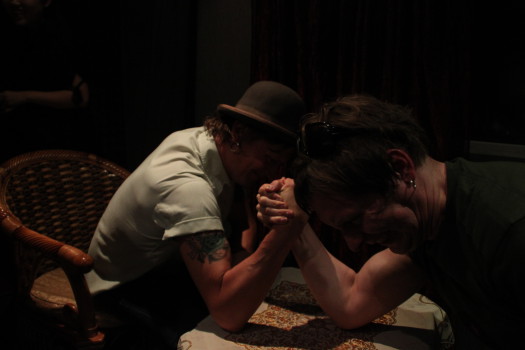 There was a dangerous rainstorm and flood that hit Harbin just before your visit. Did it affect arrangements in any way? Also since I’ve heard good feedback of the performance so I want to ask if you would like to visit China or Harbin again in the near future?

Oscar: ”The second gig that was supposed to be, got cancelled. the storm took the down the whole stage and buried it in mud. Olavi didn’t seem to mind about it. Well,what the fuck. same salary, less work. And it was not an important gig. Just a sideshow.”

”I’d like to come again, for sure! I think they loved us and really look forward to getting us back. But next time i really want to meet the governor and get a bigger pay. They cancelled the meeting because Niko broke the elbow of a festival worker during arm wrestling. It’s not my fault that this guys bones are so weak.”

Panda: ”Yeah those were really bad news. We had to cancel that other important show because of that. And I had to fight a bit to to get the promised fees. What can you do to such stuff really? We asked already if they would be interested getting us there this year but no answer yet. I’m afraid they might think the band is too unpredictable and hazard. Let’s see.”

This entry was posted in Blog, Interviews and tagged China, Knucklebone Oscar. Bookmark the permalink.