Interview: The Trees and the Wild met the Ambassador of Indonesia in Helsinki

Club Niubi brought The Trees and the Wild to Helsinki, Tampere and Tallinn in late September. Their lead vocalist and co-founder Remedy Waloni answered a few questions after the tour.

What do you remember from your visit in Finland? Were there any funny incidents or cultural clashes?

Remedy: ”I guess drinking tap water was quite a challenge. The first week was a hell in terms of drinking water.”

Was it surprise that the Ambassador of Indonesia came to see your show in Helsinki? How did he feel about it? Was he familiar with Indonesian indie music?

”Yeah of course! But actually he was cool and greeted us backstage after the show. He said he was really proud! Hehe I can’t really say whether he was familiar with Indonesian independent music or not.” 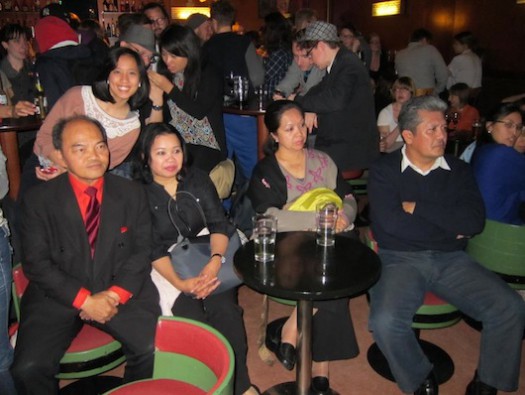 The Ambassador of Indonesia Mr. Elias Ginting (right) and his entourage watching The Trees and the Wild at Dubrovnik. (Photo: Made Sentanajaya)

In Indonesia, is it easy to find albums made by European or American indie bands? Do you have any favourite bands?

”Yes it is very easy. We love Bill Callahan.”

What kind of record store culture do you have?

”Actually not that much if you talk about records. There are only a few places in Jakarta that sell records.”

”Well there are certain musicians that are influenced by traditional music but not in a grand scale.”

Does indie music get covered in Indonesian media?

”Well not really. We are still in the shadowsss.”

Who were your idols when you were teenagers? What made them special? Where did you find them?

”When I was like 8, I used to read these books ’seri tokoh dunia’. It is a series of comic books about famous inventers, philosophers and composers. One inventer that really struck was Thomas Alfa Edison. But not as an ’idol’, just for inspiration. Cause I don’t like the term ’idol’.”

How do you feel about European and American post-rock? Do you have any favourites?

”Yeah it is really nice. Slint and Godspeed You! Black Emperor.”

How you were introduced to that genre?

”I can’t really recall, I first listened to those bands when I was in high school.”

What Indonesian indie band would you recommend to our readers? Why?

”I love Sore and Panda Beach. Because they are really good!”

This entry was posted in Blog, Interviews and tagged Indonesia, Panda Beach, Sore, The Trees and the Wild. Bookmark the permalink.