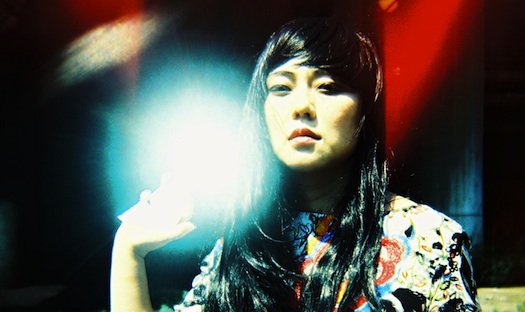 Nova Heart took a visit to Icelandic Airwaves showcase festival after touring with Club Niubi in October. Rolling Stone Magazine’s David Fricke, one of the best known rock music critics in the world today, saw their gig – and according to his review it was love at the first sight:

Mr. Fricke wasn’t the only one who got impressed. Blogs like The Line of Best Fit, Grapevine Airwaves and Oluremi wrote very positive reviews of Nova Heart.

Putting Nova Heart’s music under one category isn’t easy, but if one insists on genre definitions, it could be described as rock, pop, indie, electro, or all of the above.

The band started as the long awaited solo project of Helen Feng, dubbed as the ”Queen of Beijing Rock”. She was born in Beijing and raised in the US and Canada, and moved back to China ten years ago. Since then, she has been very active in the Beijing rock scene.

Club Niubi brought the band to Finland, Tallinn and Stockholm in mid October. The band’s manager, Philipp Grefer, was kind enough to answer us a few questions via email after their tour.

How did Nova Heart end up performing at Icelandic Airwaves festival?

”Nova Heart was playing Canadian Music Week in Toronto and I convinced the boss of Icelandic Airwaves to come to the show. He really liked it and so he invited us to come over.”

What are your thoughts on the band’s performance there? Do you consider it successful? How was the reception?

”Instead of telling you how the shows were I rather let other people speak (in reference to the many positive reviews about the performance). But yeah, I guess it was successful.”

During the tour, was there something that was particularly memorable doing the shows and visiting countries like Finland, Estonia and Sweden?

”We particularly liked playing in Tallinn. A fresh young crowd – tons of people partying very nicely and quite excited about the show. Helsinki was the place who did best in record sales. One third of the audience bought a CD. In Stockholm it was interesting that half of the audience was Chinese.”

Were there promising new contacts made, possible plans for future tours, or perhaps interest from European record companies?

”We met indeed a lot of people in Europe that were interested in further collaboration. So, I’m sure we’ll be back soon.”

Overall, how was the experience with Club Niubi?

”I think it’s great that Club Niubi exists and puts so much passion in this whole project. It’s a great idea and well executed. Of course there is always room to improve but this is just the beginning.”